March began exactly the way we like it to at CMM - with plenty of time spent waiting on the Holy Spirit.  Roger and Mary led a special retreat day for a wonderful organisation called Travelling Light.  Robin and Carole, leaders of Travelling Light, have long been friends of CMM after they were introduced to times of waiting on the Spirit on an EBRG retreat many years ago.  They have since formed their own retreat ministry, and have Roger and Mary on their council of reference.  It was lovely to go over old ground with Robin and Carole, as well as the new people in their team.

The quiet day theme continued with Roger leading yet another retreat day, but this time in Hemel Hempstead for the Joyful Noise Choir.  This choir, led by Sarah Moreton, have been learning Barnabas for their own production on 7th May, and they booked Roger to come and share a day of inspiration with them.  Roger was delighted with the day - it was wonderful for him to teach on the Bible passages behind Barnabas, and also to prepare the choir for ministry.

The following Saturday, Annie and Roger travelled with Alan to St Luke's Church in Lodge Moor, Sheffield.  There they were joined by a wonderful CMM team including Simon, Sarah, Marilyn, Keith and Chris.  Gemma was also supposed to have been on team, but her train was stuck outside the station for several hours - she did eventually make it!

It was a joy to share the Worship Works teaching at St Luke's.  They already have so many talented people involved in their music ministry, and they along with a number of visitors resulted in a really great turnout.  Expectancy was high, and God blessed a number of people.  Annie in particular found her workshop a blessing - those there fully understood all she had to say and joined in brilliantly with the different exercises.

One of the highlights of the day was seeing some old friends - Liz Tipple who organised the day has also organised other things for CMM in the past, most notably tour performances of Jail Break and Rock in Sheffield.  It was so great to catch up with her and see how she is getting on in her home church.  The day in Sheffield was the last in a wonderful run of Worship Works events.  We'll pick them up again in the autumn. 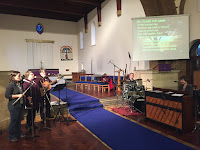 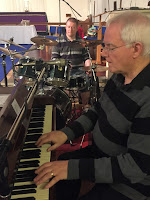 The following day saw Roger, Helen, Annie, Tim, Jonathan and Jane form a worship band for a renewal evening at Christ Church, Burney Lane, Ward End.  This time Peter Smith, vicar at Ward End, was the speaker.  It was a wonderful evening (apart from Helen having almost no voice), although it was tinged with sadness, as this is to be the last of these evenings.  From death springs new life however, and we look forward to seeing all God is going to do at Christ Church as they look to the future. 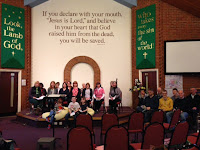 The following week was a busy one, with Roger and Helen travelling down into Devon, and Annie spending a day at Freshbrook Church, Swindon.  There Mike Rabbitt had gathered a choir to learn the musical Jerusalem Joy in a day.  Annie's team of helpers was Paul, Caroline, Jonathan, Christine and Wendy, who were a great help.


It was a lovely day - Mike has 4 amazingly talented children who took a number of solo roles, and he himself took the part of Judas.  They were also amazingly well fed with jacket potatoes and bring and share cakes - incredibly important when you need energy to get through the day!


The performance itself went incredibly well, with 40 or 50 in audience.  Annie was delighted to see some folks from Bath Road Methodist Church come to watch - she has led a couple of musical days there.

While Annie was working hard in Swindon, Helen, Roger, Yvette, Devon and Bill travelled to North Devon for a Barnabas day.  There they were joined by local team member Bob, who had organised the day alongside the amazing Nic.

Bob had been training the choir for a number of weeks, and they were on really excellent form by the time the team arrived.  After a full and excellent rehearsal all afternoon there was a short tea break before the audience began arriving.  And it really was a terrific audience - lots of people, and lots of familiar faces to catch up with, including Dan from Lee Abbey, and John - a former tour organiser.

One of the highlights of the day was the choir prayer time.  Everyone gathered together in a room to pray, and as part of the time, Roger shared some of the things our prayer group, EBRG, felt they might have heard from God.  Immediately two of them were claimed by ladies in the choir, and a very exciting and powerful prayer time followed.  At the end, Roger asked one of the ladies how she was doing, as she had been moved to tears, and she replied, "Well, before today I was listening to God, and he told me not to wear mascara tonight!"  God is so good.

The performance itself went incredibly well, and huge thanks go to Nic for his organisation, and Steve and Adam on the sound desk - it was not an easy task!  The buzz in the room afterwards was great, with lots of excellent conversations.

The following morning the team shared in the service at Appledore Baptist, where Bob led worship and Roger spoke.  As part of the ministry time Devon sang one of his latest songs 'You are worthy of honour' which went down very well indeed.

We are so thankful to God for all he does through the ministry. 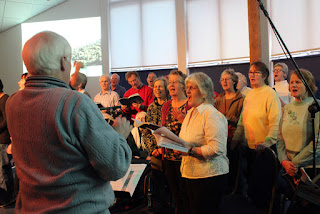 I just stumbled on your wonderful blog. Great to see this is out there where everyone can see what great things you're doing for the glory of God. Keep it up !

Praying for you ! The Castle Lady

Thanks Evelyn! About to put up a new blog covering April's events, and then hopefully in May I'll be able to post some more interesting things, and not just what we've been up to.