A gentler summer at CMM

With a huge amount of preparation for a couple of things (to be blogged about shortly) going on behind the scenes at CMM, we had a slightly gentler time of it in terms of getting out on the road over the summer.

July started off with a bang as Roger, Helen and Devon travelled to Newthorpe in Nottingham for a special evening with Devon.  There they were joined by Alan on drums, Chris on guitars and Kevin on cornet, as well as local instrumentalist Yvonne.  The singers for the evening alongside Devon were Carolynn, Yvette and Richard.  Beyond all of these CMM team members there was the wonderful Newthorpe Choir, trained by Carolynn specially for the evening.

Rehearsal on the Tuesday night was followed by performance on the Wednesday.  Devon has a powerful and moving story to tell, and the evening was yet another example of the power of testimony.

Thanks so much to all at Newthorpe for organising a wonderful evening. 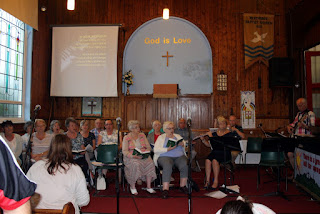 A few days later a different CMM team travelled to Cricklade United Church in Wiltshire for a Worship Works weekend.  Roger was assisted on this weekend by Annie, as well as Kaye, Katie, Marilyn and Paul.

Worship Works events are a real passion here at CMM, and this was a great weekend, although hampered a bit by Annie's car being out of action.  One of the joys of the weekend at Cricklade was the wonderful support of the minister, Rachael.  Sometimes we can be invited to a church by the music team, and the leadership isn't always right on board, but there was huge enthusiasm in Cricklade.  It is always so encouraging when all the ministry shares in a church has potential to have an impact in future.

Then it was time for our first music week of the summer.  In early August Roger, Mary, Annie, Helen and Sally were the team for the Mary Magdalene music week at Lee Abbey.  They were joined by Karl and Molly, as well as Tim and Emma with Michael and Bethany to make it a proper Jones family holiday!  The week was utterly brilliant, with wonderful support once again from the Lee Abbey Community and the pastoral couple John and Ann Pangbourne.  If you get a spare 10 minutes do watch the video Roger and Mary made of the week.  It is a bit Jones-centric, but gives a great idea of what we get up to.

The summer was completed with a music week at Scargill House near Kettlewell in the Yorkshire Dales.  Again the musical that formed the focus for the week was Mary Magdalene.  This time the CMM team were Roger, Mary, Annie, Sarah, Jaime and Paul.  Highlights of the week include a wonderful Musical Man evening, Aled leading a drama group in a mime for the 'Delivered' piece, and a new edition to the musical - digital bagpipes playing 'Amazing Grace' at the end of 'I heard the voice of Jesus say'.  Have a look at the photos below: