Helen took with her a team of Caroline, Bob, and Paul to sing the roles in Jairus' Daughter, as well as Miriam and Peter to play their instruments.  The musical in a day took place at Sandfields Methodist Church in Port Talbot, and there was a lovely choir there for Helen's second visit to the church.  One of the great joys of the day was a group of about 12 teenagers, some of who
m read the extended narrations, and the rest sang, including a couple of the solo roles.  It was lovely to have so many young singers, as well as a good choir of adults behind them.  Bob absolutely loved hamming up the Jesus role in the song 'Bad News', and Caroline had a great time with the descant in the song 'If I can just touch him'.

The following morning Helen and Miriam remained at Port Talbot and took the morning service.  It was great to be able to share with the congregation there. 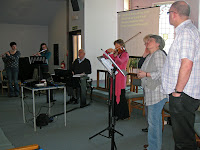 Roger and Annie were leading a music in worship weekend at Haydon Bridge.  They had with them Mary, Kathleen, Richard, Marilyn, and Sharon with her daughter Gemma for the Saturday.  It is always so good when CMM is able to share with people about music in worship, and this weekend was no exception.  It was also wonderful for the team to be in Haydon Bridge again, as there has been a long connection with CMM and the church there over the years. 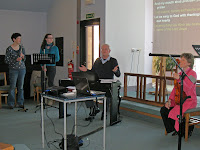 Roger began with a 'Being a Worshipper' session, and finished with 'Ways to Praise', but in between Annie led a workshop on new songs, and Roger led another about praise in the local church.  There were a good number present for the Saturday workshops, and that included a number of musicians. 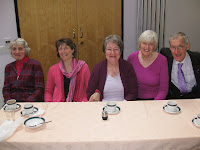 On the Sunday morning the CMM team led the morning worship.  It was a really blessed weekend.
Posted by Helen at 15:39