Every few years CMM has run a trip to Scotland, visiting various venues with the latest musical.  This time we've had a bit of a change, and instead of performing a musical in lots of locations we have focused on just two places - Newton Stewart and Lossiemouth - for some music in worship events.  We managed to throw in a couple of Two Sisters and a  Funeral performances as well, but music in worship was the main aim.


The CMM team of Jonathan, Devon, Caroline, Alan, Miriam, Amy and Ruth all travelled up to Newton Stewart on the Friday evening, to be joined by Roger, Mary and Helen on the Saturday morning for a music in worship day.  Miriam (singer, clarinettist, guitarist and Helen's sister) and Ruth (dancer) hadn't come on a CMM tour before - in Ruth's case, a CMM event before!  But they both fitted in really well and did a great job.


These are Helen's email updates from the tour:


Thought I'd send a quick email from my phone to keep you all up to date!
Roger, Mary and I left Grange at 7 this morning and arrived in Newton Stewart in plenty of time for the start of today's workshop, which was great. There were about 30 people there, including a lot of church leaders and musicians. They were very open and keen to learn and worship, really got stuck in and knew a lot of the new songs.
Roger spoke really well and people seemed to connect and lap it up. After lunch we split into two workshops. Roger led one for musicians and Alan and myself led one on receiving the Holy Spirit where we spent a lot of time waiting on God. We had about 10 in the group and God really spoke to some of them, which was really encouraging. A lot of the words from EBRG the other week have been claimed too.
The final session was on psalms, hymns and songs, and the ministry time at the end was really special with a number of words claimed and people prayed for.
The team have been great - we have a dancer called Ruth with us for the first time, and she's been great. Her dancing is beautiful, natural and heartfelt.
Off out for dinner now with hosts.
Thanks for prayers. We're at two different services tomorrow morning and then a praise service in the evening. All the churches have shut for it, so no pressure...
Helen

Then a couple of days later Helen sent another update:


Hi everyone,
We've had another great day. This morning Roger took Mary, Jonathan, Caroline, Amy and Ruth to Monigaff church in Newton Stewart. They had an excellent service. Roger spoke about John 12:1-8, focusing on sitting at Jesus' feet and the God who can do more than we can ask or imagine.
I went with Miriam, Devon and Alan to Kirkmabreck, and we had a good time. They are a very traditional congregation but they seemed to cope ok with my being a worshipper talk!
Peter is minister at both churches, and he came to both services as they were one after the other. He and his wife Vonnie are amazing - so full of the spirit and they are very enthusiastic. They had us all for lunch and we were able to sit out in the sun and have a rest.
This evening we all went to Monigaff and led a praise evening. Lots of churches had cancelled their evening services so there were a lot of people there. The atmosphere was quite heavy, and while those at the front were really going for it in the worship, those at the back looked a bit miserable! At the end though they seemed to have really enjoyed it, and quite a few people came forward for prayer.
Tomorrow we have a day off then on Tuesday we drive 5-6 hours up to Lossiemouth.
Hope you're all well.
Helen 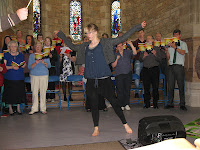 This was the first update once the team had moved up to Lossiemouth:


Hi everyone,
We made it safely up to Lossiemouth, which took a long time but was very beautiful. It has been lovely to spend a good amount of time here and our hosts are looking after us amazingly well.
On Wednesday morning we gathered as a team to rehearse and set up the church for two sisters and a funeral. It was a good rehearsal time, especially as Miriam and Ruth had never performed the musical before. Then after a nice afternoon on the beach and playing pitch and putt we had the evening rehearsal with the choir. The choir from Lossiemouth were joined by a few singers from Aberlour, and together they made a fantastic sound. The lady who normally trains the Lossiemouth choir has been very ill for the last few months so instead a different lady, Rosemary, has stepped in. She has taken on an enormous amount of work, because she is also hosting Amy, Ruth, Devon and Jonathan!
Yesterday we had a nice amount of free time, so we all went to Spey Bay and saw some dolphins. Roger and Mary used the time to visit the recently set up Ellel Scotland. They had a wonderful time and are talking about a potential music week there.
Last night we had the performance. The church felt nice and full, and people seemed to really enjoy it. There were a lot of good conversations afterwards. It is good that we are back at the church on Saturday and Sunday so hopefully we can take things a bit deeper.
Today we go to Aberlour for another performance. The church has had a new sound system since the last visit, but apparently nobody knows how to work it, so that could be interesting!
Please pray that God leads us into taking conversations past the superficial level and that people are able to really meet with him tonight.
Helen

This was Helen's last update from Scotland:

Hi all,
On our way to our overnight stop in cumbria now from Lossiemouth. It's a bit depressing seeing an ETA of 2030 even though it is early afternoon!
The visit to Aberlour was wondeful.  The team there looked after us amazingly well.  There is a trust fund in the town set up in the late 1800s to help pay for evangelistic work, and whenever we come to Aberlour they help to fund the visit.  Maureen had trained the choir and local musicians brilliantly - we had an extra clarinet, cornet (Shuna the minister), a flute and a violin.  They really added to the whole thing.  The new sound system was excellent and the performance sounded great.  There were quite a few in the audience, and some good conversations afterwards including some prayer ministry.
The worship conference was great yesterday. There were about 25 there from a few different churches, which was good. Roger was on good form and covered a lot of ground in his talks. The afternoon workshops went well too, although Roger grabbed most of the crowd by playing Jubilate on the keyboard just as they were about to start! The team were brilliant in the receiving the Holy Spirit Workshop, praying for people and giving words etc. Please pray that if it is right for some of what we shared to be put into practise those with the right gifts come forwards with confidence.
This morning we participated in the morning service at Lossiemouth. Graham the minister had already prepared a sermon, but he was willing to hand the rest over to us. I led the children's time, and Roger led a block of praise songs.
We've been looked after amazingly with wonderful hosts but we're looking forward to getting home now. One more night!
Thanks again for all your prayers
Helen

Overall we are absolutely delighted with the Scotland visit, and we look forward to going to some of the other venues next year.  Huge thanks go to Janette and Peter in Newton Stewart, Kath and Rosemary in Lossiemouth and Maureen and Shuna in Aberlour for being willing to have us.  We pray for them all in the 'aftermath' and know that they with God's help will continue to do amazing things.