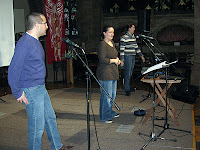 At the end of November, CMM was in two places once again (actually, 3 if you could the UCS Manchester's performance of Two Sisters on the same day!).  Roger and Helen travelled to Macclesfield with Devon, Amy, Richard and Alan.  It was Richard's first gig with CMM in years, and it was brilliant to have him with us!  He got back in touch by last year joining the CMM fantasy football league, which he promptly won, which made Roger ring him and ask him to come and sing again! 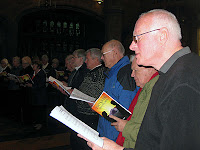 The day in Macclesfield was organised by Wendy Moss, who Roger and Mary have known for year - she has regularly organised Macclesfield events, as well as come to quite a few of our music weeks and events.  It was great to see her, and the choir trainer Dot - together they make a wonderful team. 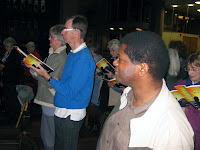 The choir had had three rehearsals before the day, and on listening to them it sounded like they had had 10 or more - they were wonderful.  There were quite a few familiar faces from our music weeks too - all of them good singers, so we knew the sound would be good. 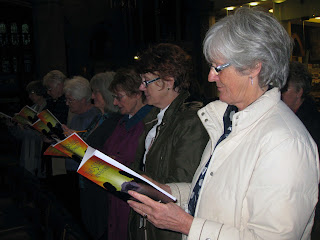 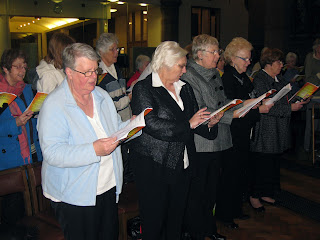 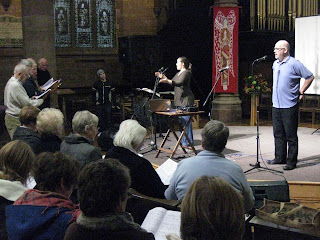 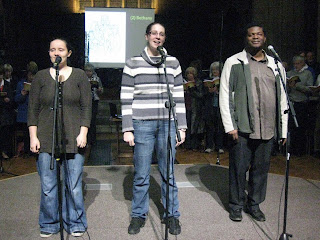 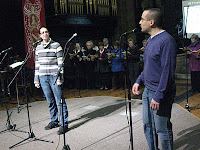 Alan on our team used to live in Macclesfield, so he had great fun being a baddie and chatting to all of the choir members.  It was also great to have Amy singing, as she's recently had to have an operation near her vocal chords - and thanks to God she has recovered amazingly. 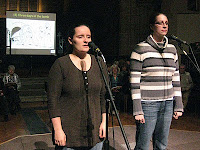 Wendy had brought in a wonderful sound technician, Elliot, who did an incredible job.  Elliot isn't a Christian, but while setting up the sound and watching the musical though at least twice he's heard a lot of gospel, so we do pray for him! 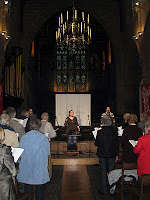 The performance wasn't brilliantly attended because unfortunately it clashed with quite a few events across the town, but we know and trust that God will have brought the right people.  We know that the choir were really blessed too - one of the words of knowledge we had had beforehand was instantly claimed, so we praise God for that!
Posted by Helen at 10:44