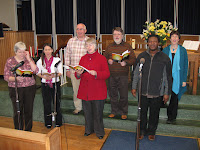 While Helen was having fun in Nottingham, Roger and Annie braved the threat of snow to travel up to Barrow-in-Furness.  They took with them some of the Two Sisters team - Martin, Devon, Emily, Caroline, Bill and Jonathan.

The reason for the journey up north was Sharon Collins' 50th birthday.  Sharon has been involved with CMM for a long time - she trains the Barrow Choir, trains the choir for our Grange music week, and also sings for us as a soloist.  A long time ago she asked if Roger would be willing to travel up for a kind of musical in a day to celebrate, and her musical of choice was 'Two Sisters and a Funeral'.  So this gave Roger the opportunity to schedule into his diary a kind of premiere - the first time the musical had been fully performed in public. 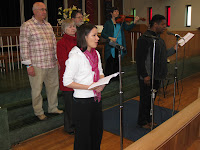 The team made it up to Barrow in time for lunch, and were delighted to see some old friends including Brenda, Carole (with Hannah), Betty and Rosemary - as well as all those they expected to see in Barrow.

Roger and Annie taught the choir the musical - this really was a 'musical in a day' as not one of the choir could possibly have learnt it in advance!  They also divided the choir into sectionals, so that the men could work extra hard on being baddies.

Roger was absolutely delighted with how the musical worked in a day, and he was also really pleased with the soloists.  It was Emily's first official engagement with us, and she sang really well.  Caroline, Emily and Devon performed the dramatic narrations for the first time, and were excellent.

The following morning Roger preached at the service at Sharon's church, particularly challenging them about house groups and fellowship.  Then after lunch the team travelled home, dropping Roger off at the train to travel to Penrith where he spent 24 hours with Graham Allan working on the biography.
Posted by Helen at 14:42